Now that the mysterious WP7 app I was working on for the last few months is done (at least v1.0!) and is in the certification pipeline, I finally have some time to start playing with WinRT.

Of course, the first thing I’m playing with is the port of this WP7 app to WinRT. In this post, I’m sharing the aspects I discovered this afternoon while trying to port one of the project from Windows Phone to WinRT. Let’s be clear my goal was just to see what it’s look like to port the code, I wasn’t able of course to port the WP7 app to WinRT in an afternoon…

The development environment for Windows 8 is currently:

Because I wanted to have the Windows Phone environment too on this machine, I also installed:

The WP7 app currently uses various libraries (all of them are described in this blog post), today I just downloaded the Windows 8 version of MVVM Light (thanks Laurent).

As a developer, one of the first thing we try when we target a new platform is to display some kind of message on the screen. So I first tried the famous MessageBox.Show() but I quickly realized the API has changed… If you want to display a message box, you must use the MessageDialog class:

As you can see, displaying the dialog is actually an asynchronous operation. If we want to perform an action when the dialog closed, we must await that call:

If you want to display additional buttons, you can add commands to the dialog:

Many namespace has changed between Windows Phone and WinRT, you can use pre-processor directives like the following

The storage story in WinRT can be summarized by the following:

Here is an example taken from the WinRT documentation:

The WP7 app contains several resource files (.resx). The resources are available in the XAML (using a binding to a static resource) and in C# using the static types that are automatically generated with the resx file. Well, it looks like those static types do not exist anymore in WinRT (also, the extension of the resource file has changed to .resw).

The resources can now be accessed using the ResourceLoader type:

I think .Net developers should not be afraid by WinRT. If you already start playing with C# Async you will be familiar with the new asynchronous API. As far as I’ve gone with the comparison I think we can reasonably imagine having a good code base shared between WinRT and Windows Phone. I can safely continue to use the XAML knowledge I got about 5 years ago on WinRT 🙂 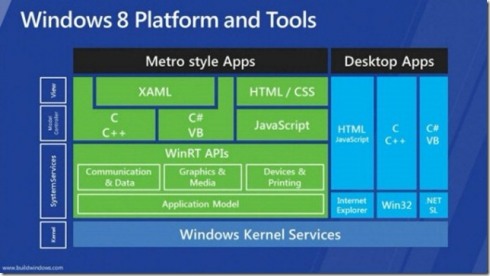 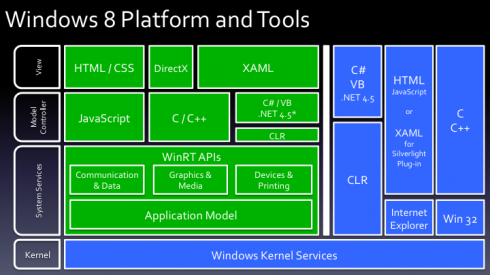