This is the perfect time to take a look at what happened in the last few months as well as what’s on the roadmap for next year. So let’s start by taking a look at 2012… 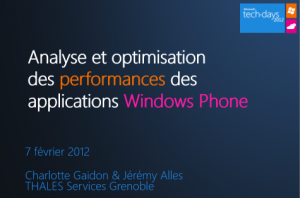 The last year I blogged mostly about Windows Phone stuff. This is not a surprise as I’m busy (on my personal time…) working for my 2Day todo-list application. I’m finalizing a major release that should be submitted to the marketplace soon with a ton of new features and improvement (several blog posts should highlight some topics from a developer point of view).

Here is the full list of article (oldest first):

I’m still deeply invested with 2Day so hopefully you should see more tips and tricks about Windows Phone. As a Windows 8 version is also on its way, that should give me many reasons to write new blog posts.