As you may already now, a CTP (Community Technology Preview) of the next version of Visual Studio is available to download. I took some time yesterday evening to try it and here is the result of my first hour using Visual Studio 2010. 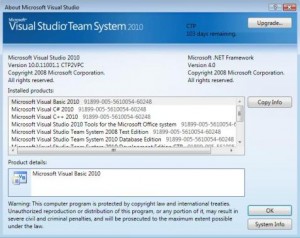 The installation process of Visual Studio 2010, is long, very long… Let me tell you why. First the download size, you’ll have to grab more than 7Go to play with the new visual. So, you should have a good internet connection, or at least be very patient.

You might ask what the hell make this new version weight more than 7Go, the reason is pretty simple: you’re not downloading Visual Studio 2010 itself, you’re download a virtual hard drive of a Virtual Machine that embeds Microsoft Server 2008 + Visual Studio 2010. Once you’ll have unzip the 11 archives file, you’ll have a virtual hard drive of about 23Go.

After being all that patient, you’ll finally manage to open Visual Studio: 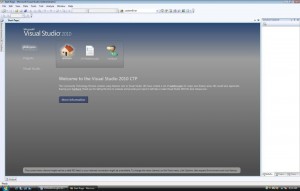 As you can see a new Welcome Page has been created and can be customized very easily (you can create a XAML file that will be loaded by Visual Studio during startup). What is also interesting is that this CTP is shipped with .NET Framework 4.0 (which means parallel extensions, and lot of very cool stuff !):

The user interface of Visual Studio 2010 is built using WPF. Many enhancements are available such as line highlighting or zooming the source code using CTRL + mouse wheel:

Performance should be improved when working with large file which is also a good news. The API for manipulating the editor and extending its functionalities is entirely new and written in managed code. We can therefore except to have some very nice add-ins in the future.

It’s finally here ! Visual Studio 2010 will enable the possibility to drag tool windows and document windows outside the main window of the IDE. That means that it will be possible to keep a clear main window is only the code editor, and tool window and designer on another screen.

Databinding support was clearly a point where Visual Studio was less efficient than Expression Blend. Using Blend, it is possible to create databinding very easily using drag’n’drop between datasource (such as an XML file) and a ListView or other control.

This is now possible in Visual Studio 2010 and I think this is one more step to prove that WPF is ready for LOB (Line of Business) applications. It becomes very easy and straightforward to build a UI that consumes data from a database.

Here is a sample application that I built by following the walkthrough that comes with the CTP:

Add a data source to the project 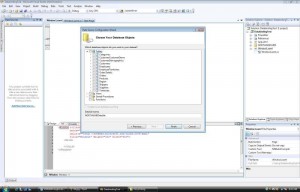 Show the tables using the editor 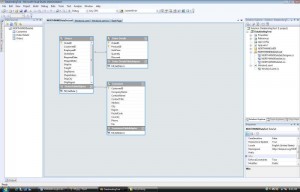 Create a combo box and the form, and bind it to the data source using drag and drop 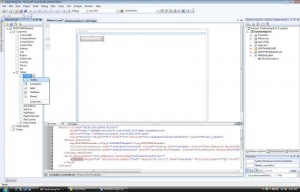 Generate a form by dragging a table on the form 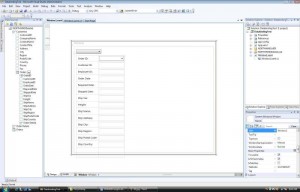 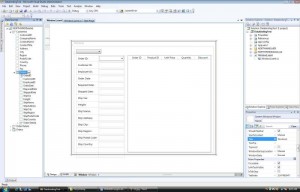 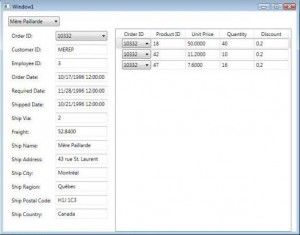 It tooks me about 5 minutes to build this sample, I let you imagine the time that would be needed to create it from scratch 🙂

The Visual Studio 2010 CTP uses a sample scenario that describes episodes in the software development lifecycles of two fictitious companies: Lucerne Publishing and DinnerNow. The DinnerNow team follows the Agile methodology and uses Scrum and eXtreme Programming (XP) to plan, organize and manage their workload. The scenario described in the CTP is composed of 21 guided walkthroughs.

Each walkthrough details how to use the new features of Visual Studio 2010 such as use case diagrams, activity diagrams or sequence diagrams. I hope I’ll have time to write about that in another posts.

I already blogged about this new feature of Visual Studio 2010 and this time, I had the opportunity to play with it. I think this is a really huge improvements that will help us to debug our apps.

The historical debugger is available through a tool window with a link “Click here to break into the debugger”: 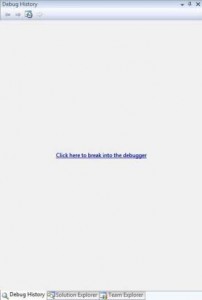 The historical debugger in action: 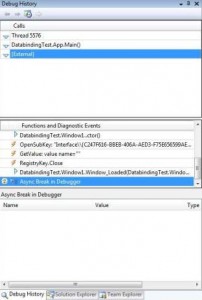 Setting up the historical debugger: 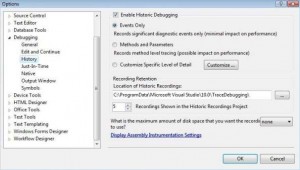 There are many aspects of Visual Studio 2010 that I didn’t mention here. I think this new environment will give us a lot of new features that are really usefull. I would like to use in particular the agile tools in a real project to see how it can helps the management of the team and the project.