Ok, let’s see another strange behavior that you might have already seen with the WPF databinding engine.

When we teach WPF to new developers, at some point we need to introduce the INotifyPropertyChanged interface. Usually, the kind of speech which is given looks like this one:

“When you’re doing a binding to a standard CLR property, you must add some kind of notification mechanisms in order to tell the binding when the value changes. In WPF, this is standardized by using the common INotifyPropertyChanged interface. This interface contains a single event which must be raised with the name of the property which has changed. Whenever this event is fired, the databinding engine is able to see the change and update the corresponding binding.”

Nothing really exciting here, right. Now, you start to do a demo with the following code:

Here the DataObject class I use as DataContext does not implement INotifyPropertyChanged.Then I added some XAML in the MainWindow:

And the goal is to display 3 TextBoxes all databound to the same property. Now, we run the application, types some text in one of the TextBox and change the focus in order to update the binding. Most of us would expect to have the 2 other Textboxes with the old value: when the focus has been lost the new string value has been pushed into the Data property, but the other Textboxes have no way to detect this change.

Actually if you run this application, you’ll see all the Textboxes being updated That’s strange… 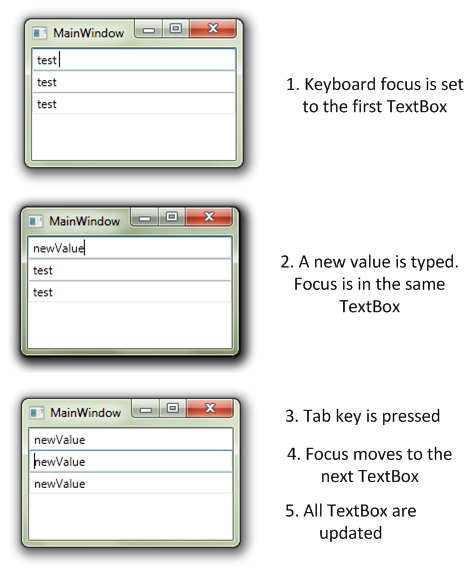 Why does it works ?

Ok, let’s get into the dirty details. Here are what happens during initialization:

What happens when one of the TextBox lost focus:

So there are no miracle behind the demo application I was talking about, just the fact the binding engine is smart enough to cache the PropertyDescriptor used for setting value to CLR property and using the ValueChanged event to get notifications if the source does not implement INotifyPropertyChanged.